ChatGPT: Shaking Up the Internet and Giving Google a Run for Its Money

Undoubtedly, the incredible ChatGPT from OpenAI has taken the internet by storm. Since its release, it has been shaking things up with its game-changing online searching abilities. And just when you thought it couldn’t get any better, it’s ready for an upgrade to make itself even more mind-blowing. But that’s not all — it’s also got people talking about serious ethical questions, even making Google quake in its shoes.

Within a week of launching, ChatGPT racked up over 1 million followers, making it the fastest-growing tech platform.

Open AI’s ChatGPT is like the ultimate virtual assistant on steroids. It’s a chatbot that’s so human-like you might start wondering if it’s smarter than you. It can come up with ideas that’ll blow your mind, type out emails faster than you can blink, and even write a hilarious birthday message for your colleague’s card. Forget those generic “Happy birthday, have a great day” messages. ChatGPT has got you covered, impressing your coworkers.

Although no official news has come from the company or its founder, Sam Altman, directly, rumors have lately been stirring that OpenAI may be poised to release an upgraded version of ChatGPT. It would be known as “GPT-4” and is the fourth-generation language model to come out of the Silicon Valley research labs. Currently, it is using a third-generation language model.

While the world is still discussing what specific changes GPT-4 will bring, initial predictions suggest that it might have a whopping 100 trillion parameters, which is 100 times more than GPT-3. 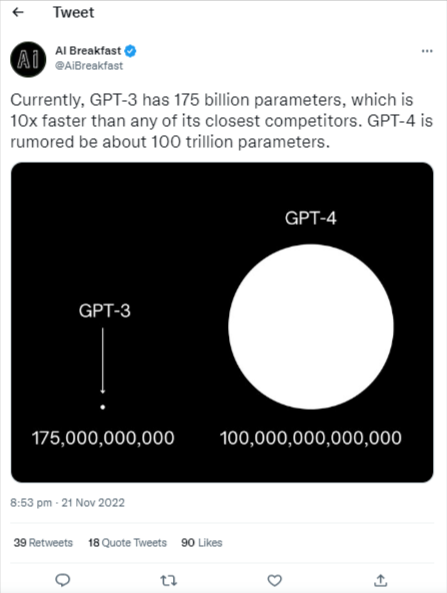 Moreover, it is predicted that GPT-4 will have multimodal capabilities. It means that it could work with images, videos, and other forms of multimedia as well. What’s more, it’s going to offer a robust processing speed and more accurate outputs.

Even though most people don’t understand why GPT-4 is such a big deal, the excitement from AI experts is off the charts. When GPT-4 comes out, our real world might become science fiction. That’s how you know it’s going to be something huge.

What Actually Is GPT?

Here’s what it answers about itself:

OpenAI’s ultimate goal is to positively impact humanity by sharing its “Friendly AI” technology with the world, and ChatGPT, is already doing that. The buzz around GPT-4 is intense because, based on the advancements between GPT, GPT-2, and GPT-3, it’s expected to be a huge leap forward in terms of ability, scope, and potential compared to the already impressive GPT-3 version of ChatGPT.

Competition or Collaboration? Which Side is Google to ChatGPT?

OpenAI is upheaving the whole tech industry. Google has been leading the internet for 20 years, but now OpenAI is gaining momentum and catching up, posing a threat to Google’s dominance. Also, posing a threat to other sectors, not just to rival AI companies but to society as a whole.

“Google has never faced competition of this kind since its Inception.”

ChatGPT is damaging the google business model in two significant ways. Firstly, the answers the ChatGPT provides are to the point, offering you a better option than scrolling the Google SERPs. Secondly, it is disrupting Google’s Ad business. Since it generates about $208 billion or 80% of its revenue from ads, ChatGPT prevents users from clicking on ad links.

“ChatGPT is just a better experience,” Sridhar Ramaswamy, Google’s Ex Ads team lead, told Bloomberg. “The goal of Google search is to get you to click on links, ideally ads, and all other text on the page is just filler.”

Whatsoever, this competition is not as unexpected as it looks. Google has been a major player in AI, and some people who wrote the code for ChatGPT used to work at Google, but now they work at OpenAI. It’s like they’re competing against themselves.

Furthermore, Microsoft is joining hands with OpenAI to integrate the ChatGPT feature into its search engine “Bing,” hoping that this new collaboration could challenge Google Search — a feat they have so far been nowhere even close to achieving. However, seeing the AI race between the two major tech giants would be interesting.

The AI Bot is Riddled With Errors, However

Some may find the ChatGPT a bit buggy compared to Google. According to Bloomberg reports, when a user put her daughter’s English essay into the bot, it generated a wrong analysis, stating that one of the character’s parents had died. Another user, when repeatedly asked ChatGPt about the first ever TV cartoon, it gives a different answer every time.

Even when ChatGPT is mostly accurate, it often makes major mistakes and gives users wrong outputs. For example, it said that former Apple CEO John Sculley was responsible for the iPod, which was released eight years after he left the company. The wrong answer may be obvious to some but not to others—but—does anyone care to fact-check it?

Sam Altman, ChatGPT’s big boss, tweeted that it’s a “sneak peek of what’s to come.” Also, they’re making sure the bot’s strong and more accurate than before. 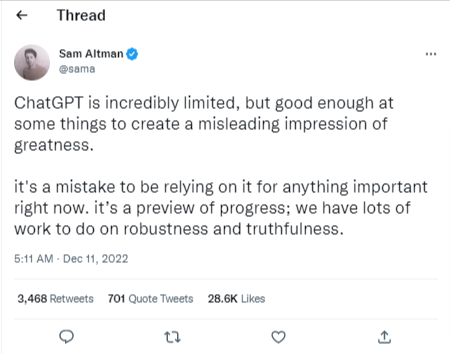 On the other hand, this technology has also opened the door for students to widespread cheating on homework and take-home work, so many schools have been scrambling to rethink how they assess students or discourage them from using it. Moreover, the New York school system banned the use of ChatGPT, and Australian universities announced a return to pen-and-paper exams and a beefed-up cheating detection system.

Another striking thing ChatGPT has done is that it has scored over 50% in one of the most difficult standardized tests around — the US medical licensing exam (USMLE).

Until now, there has been no real-world evidence that LLMs are harmful. But these errors, however, support the argument that scaling ChatGPT would create new challenges.

A Powerful Tool, But Still No Substitute for Human Creativity

Despite how advanced ChatGPT has become, it will never be able to match humans’ limitless creativity and capabilities. Like any new technology, there’s always a learning curve, and it takes time to understand its capabilities and limitations. Let’s hope the world makes a wise choice, so this breakthrough technology can be used for good instead of harming our global community in the wrong hands.