How is Machine Learning Making Code Generation Easier Than Ever?

In today’s world, software runs pretty much everything. Everything relies on software, from our trusty smartphones to the nuke missiles and even the cars we drive. But here’s the kicker, there’s a major shortage of people who can make all this software work. Also, the global shortage of skilled developers may reach 85.2 million by 2030, according to US Labor Department.

Also, at some point, we’ve all turned to Google or Stack Overflow for help with coding. But since Artificial intelligence is gaining ground, we could imagine a future where we rely on it for little to big, all coding tasks. However, the one question we all have in our minds is: will AI replace human coders? In this article, we’re gonna explore the capabilities of machine learning in code generation and how it could make life easier for developers.

Writing The Code With AI: What’s The Process?

AI code generation or AI-assisted programming works by auto-completing the human-written portions of code or taking instructions that explain the code to be generated. The powerful underlying network is trained on similar patterns of large language models (LLM), except they’re trained on source code.

AI-powered tools can also help developers generate code by analyzing inputs such as natural language requirements or visual interfaces. It can save developers a lot of time and effort, especially for repetitive or boilerplate tasks. Apart from generating code, the all-powerful artificial intelligence is also good at code analysis and debugging.

AI-powered tools can also help you by auto-completing or suggesting code snippets. It can help speed up the development process and reduce the risk of errors.

You can analyze already written code with AI. It lets you identify patterns, bugs, or areas for improvement. This way, you can write better, more efficient code and improve the overall quality of the software to the fullest.

Some AI-enabled tools can also be used for debugging code by figuring out the root cause of errors. In addition, it suggests various solutions and offers line-by-line details of the error.

AI also lets you develop models for use, making the development process much faster and more efficient.

Which is the Most Popular Language AI Used For Coding?

Although Python was created before AI became a mainstream technology for businesses, it’s one of the most popular languages for Artificial Intelligence. Also the most used machine-learning language as well. What makes Python’s so popular within AI is that it can efficiently analyze big data, and offers you clear, streamlined code with simple, easy-to-read syntax.

If you got a lot of data to sift through, it has a plethora of awesome libraries like Pandas making work a smooth process. Also, Python has a ton of great machine-learning libraries like TensorFlow and Keras. And if you’re into scientific and computational libraries, you’re in luck with sci-kit-learn and NumPy. However, if you’re feeling extra adventurous, you can use it to control your microcontrollers in projects like MicroPython, CircuitPython, and Raspberry Pi.

Picking the perfect language for your AI project is like a work of art. It’s not just about facts and figures but also about finding out what fits your project best. Some languages crush it when handling huge amounts of data and crunching complex numbers, while others excel at understanding human language.

OpenAI Codex is the model based on a popular LLM model, GPT-3, that powers GitHub Copilot. GitHub’s co-pilot is a powerful tool that generates human-like text. It works with developers’ workflow and helps them write little bits of code or simple functions. It’s great for cutting down on development time.

OpenAI Estimates that Codex produces the right code 37% of the time.

It can write code in different languages like JavaScript, Go, Perl, PHP, Ruby, Swift, TypeScript, and even BASH. It’s been trained on billions of lines of code from places like GitHub repositories, so it’s pretty smart.

It is quite famous for generating code at an exponential rate. It generates code in Python or C++ while filtering out any bad coding. Moreover, it helps programmers with code generation and can tackle some pretty tough problems. It was designed to address issues other AI coding systems had, and it’s especially good at handling problems that need a lot of analysis and critical thinking.

In a coding competition on the Codeforces platform, AlphaCode received an average ranking in the top 54.3% in simulated evaluations and achieved – “approximately human-level performance.”

What’s cool about AlphaCode is that it can make many programs using these neural networks called transformers. Then it picks the best 10 out of all those programs, which is quite similar to how many a human might come up with.

Tabnine is an AI code assistant that helps you make a better developer. It predicts and suggests your next lines of code based on context & syntax. No matter what your tech stack looks like, Tabnine can help you code faster. Tabnine’s completions can be run on your laptop, on a server inside your firewall, or in the cloud. Moreover, its goal is to support you based on your security and compliance requirements.

Built by researchers at SalesForce, Code T5 is an open-sourced programming language model and one of the first code-aware, encoder-decoder-based models. It enables various code intelligence applications, including code understanding and generation tasks.

The CodeT5’s developers sourced over 8.35 million code instances, including user comments through publicly accessible GitHub repositories. Furthermore, these Datasets were mainly derived from CodeSearchNet, which includes Ruby, JavaScript, Go, Python, PHP, C, and C#, as well as two datasets from BigQuery related to C and C#.

Mostly, the code generators aren’t open source; however, Polycoder is one of the first open-source code generation models. Polycoder is based on OpenAI’s GPT-2 model, which is trained on a 249 GB codebase in 12 programming languages. Its developers claim it can write code in C language more accurately than other code generation tools. It’s also an alternative to OpenAI’s Codex.

Meet ChatGPT: The AI Chatbot That’ll Write Code For You

Other chatbots have been around for a while, but they’re basic and can only answer a few questions like product support or simple weather forecasts. But ChatGPT has touched new heights of sophistication with its responses — it’s super advanced. It can perform many tasks like making software, writing articles, and generating novel business ideas.

Coding with ChatGPT is pretty easy. When I enter a text prompt “write basic python Greet function,” here’s what it responds: 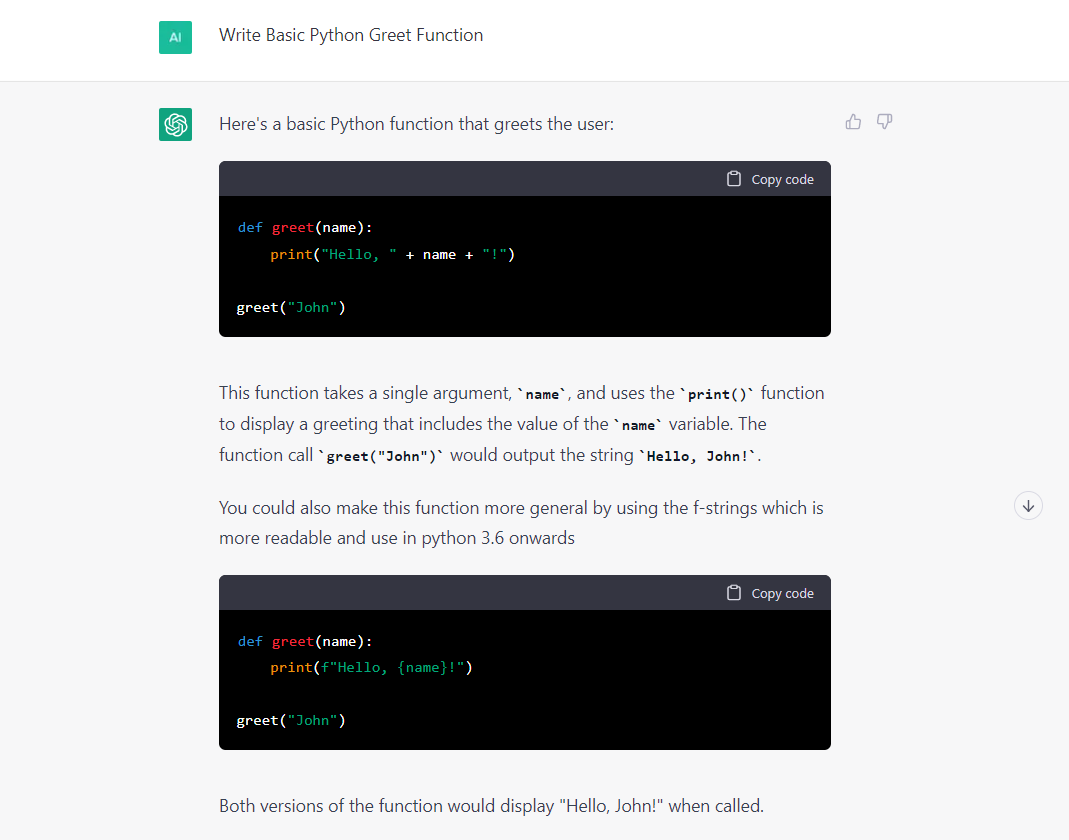 Coding with ChatGPT is like having a secret weapon for your coding projects. Whether you’re working on something simple or tackling a big project, it’s a handy tool to have in your toolbox. With a little guidance, you’ll be amazed at what you can achieve with ChatGPT Code.

Besides generating code, you can use it to build websites, write essays, and so much more! If you learn how to harness its power, you’ll wonder how you got along without it. It’s a versatile tool that will make your life much easier.

However, Coding with Artificial Intelligence Has Some Downsides

Well, there are a few downsides to using AI for coding. One is that it can be expensive. Developing AI models and training them requires a lot of computational power, which can add up quickly in terms of cost.

According to a recent study, developers using AI systems to generate code for their apps are more likely to have security flaws.

Secondly, it can be difficult to understand how the AI arrived at a specific solution or decision, especially if it’s a complex model. It is known as the “black box” problem, making it hard to troubleshoot or improve a solution if you don’t know how it works.

Moreover, AI models can be prone to errors or biases if the data used to train them is not diverse. As it’s based on the data fed to the models, it can replicate the biases and errors from the data, which is why sometimes it’s unreliable.

Lastly, the increasing usage of AI for coding and automation could affect the job market. Jobs that humans once did may become done by machines, leading to job losses and a shift in the types of jobs available. So, while AI can be a powerful tool for coding, it’s crucial to consider its potential downsides.