ChatGPT: The Next Best Chatbot or Just another Short-lived Fad?

Recently, the talks of OpenAI’s ChatGPT have been bustling around the internet. Some might consider it a groundbreaking technology compared to Google, while others consider it a simple chatbot that works similarly to traditional AI chatbots. But what is ChatGPT, actually? How it works, and what makes it exceptional from the dozens of other AI chatbots? We will walk you through everything you need to know about this novel technology. Let’s get started!

Short for “Generative Pre-trained Transformer,” ChatGPT is an artificial intelligence (AI) technology that allows you to converse with machines naturally. The ChatGPT’s dialog format enables it to answer follow-up questions, admit mistakes, explain what something does, challenge incorrect premises, translate between languages and reject out-of-line requests.

ChatGPT is designed to mimic human conversation and provides a detailed, satisfying response. It uses a natural language processing (NLP) system to respond to you conversationally. Trained on 175 billion parameters, the model has an in-depth understanding of spoken and written words and has the potential to simplify your everyday life!

There are a lot of interesting experiments going around. A user named Jeff Yang asked the chatbot to “explain zero point energy but in the style of a cat.” As it’s a complex algorithm, the answer offered by chatGPT was funny and kind of creative – but most importantly – It made sense of a very senseless request! Quiet impressive for a conversational chatbot. 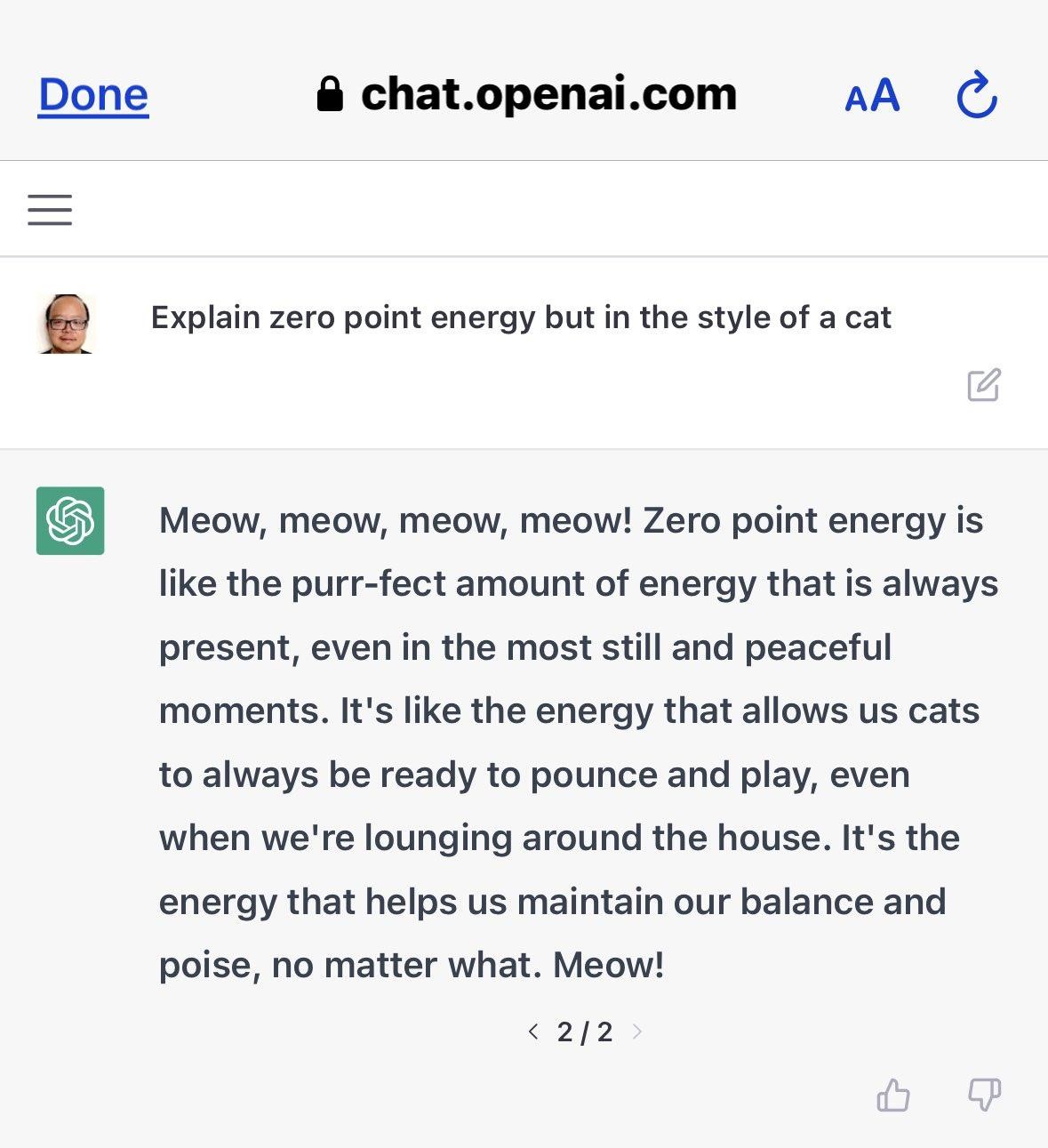 One of the amazing things about this technology is that it learns from its interactions, enabling it to understand the context precisely and ultimately making it highly adaptable for anyone.

How ChatGPT Came Into Being? A Little History

ChatGPT isn’t the newest technology, however. It was launched and developed by OpenAI, artificial intelligence research, and deployment company. According to its developers, the powerful chatbot is based on GPT-3.5 architecture, a language model trained on trillions of words from the web.

Right after its launch on November 30th, 2022, the technology gained buzz around, and people hailed it as a “Mind blowing” technology. Currently, the chatbot is a prototype and represents the latest in a long line of GPT technologies.

Since it’s been trained on tons of conversational text, it’ll sound pretty natural. Moreover, it’s very simple to use. Just write a message, and ChatGPT will complete the rest of the work.

ChatGPT has surged to popularity, reaching one million users within five days of its launch.

The Working Behind ChatGPT – What Makes it Amazing

The dialogue-optimized AI model ChatGPT has been trained with human feedback. RLHF (Reinforcement Learning from Human Feedback) has been proven to produce better texts.

While training the ChatGPT model, OpenAI used similar methods as for InstructGPT. In addition to those methods, they collected “dialogue data” from humans who wrote both sides of a dialog. First their own and second as AI assistants. As OpenAI calls them, these AI trainers also had access to modeled suggestions to assist them in writing their answers. 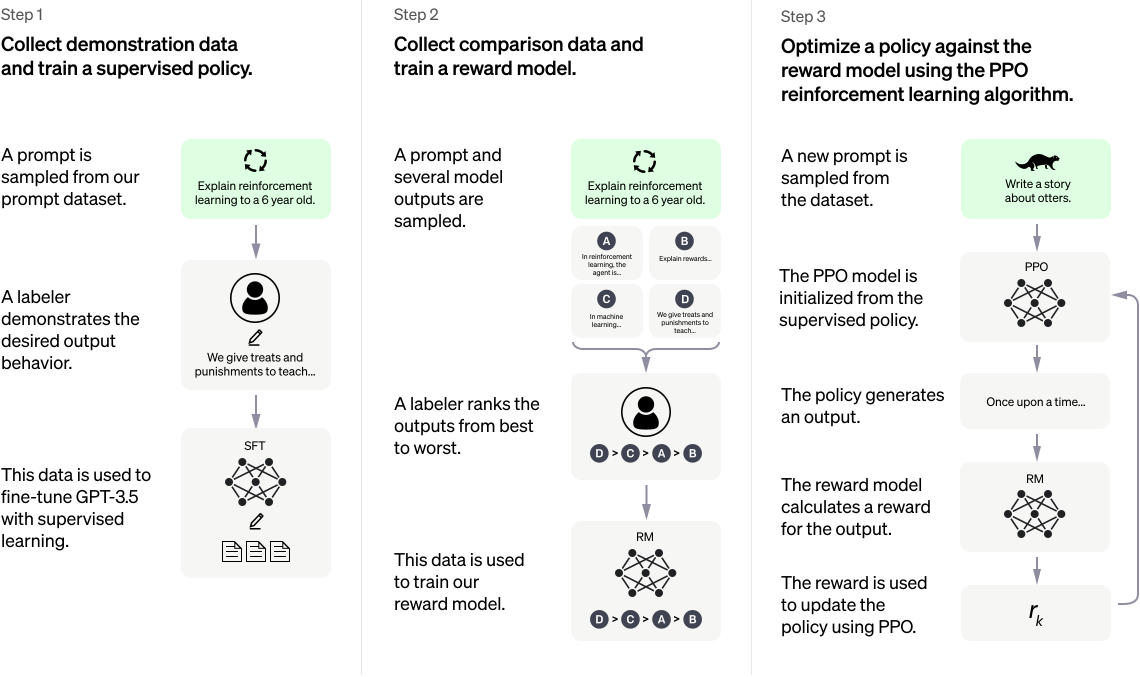 For fine-tuning, OpenAI used proximal policy optimization. OpenAI recorded the conversations between the AI trainer and the chatbot for the reinforcement learning reward model. Afterward, they randomly took an AI-generated response with multiple autocompletion and had the trainer rate it. OpenAI ran the process several times.

What Can ChatGPT Do for you?

So far, of the many chatbots that we have come across, ChatGPT can do some really interesting things. Here is a list of some amazing features of ChatGPT:

Various Use Cases and Applications of ChatGPT

Seeing how people play around with this novel technology, the more we realize how it can change everything. Below are a few quick examples of how ChatGPT could streamline roles and make people more productive:

ChatGPT offers interactive training. It can help employees become more engaged and motivated in learning. You can offer personalized training based on the employee’s needs and create an individualized learning experience. For example, companies can use chatbots to cater employee specific queries about training materials.

Being a chatbot, ChatGPT can track your employees’ performance and provide you with feedback. That’s how you can ensure that the company offers the best possible training resources while employees are learning the right thing.

If you’re a pro coder or a beginner, ChatGPT will be supportive in both cases. For example, if you have trouble solving a particular issue, just ask the AI chatbot to write the code, mention the code language and relax. Your problem will be solved in a few seconds. Also, ask ChatGPT to look at a piece of code for errors, not just it will check and identify the flaws. In fact, it will tell you ways to fix those errors.

More likely, ChatGPT is going to have a super-colossal impact on Edtech. Teaching the basic concepts and offering an avenue to have your doubts cleared is undoubtedly a great use case for lots of ed-tech companies. What’s more, now you can’t only rely on homework, essays, and assignments to evaluate performance. The pace at which such technologies are emerging is a clear sign for you to come up with new ideas and methods for performance evaluation.

Probably it’s the most underrated use case of ChatGPT. Amidst the big data revolution, unstructured data is a blister — it’s hard to sort, handle, and organize. Here, the ChatGPT comes to the rescue as it can transform unstructured data into structured data, for example, entity extraction.

Communication services are complex, so operators get a lot of customer service questions that are hard to answer. ChatGPT can lower the overhead on operators. Mainly, chatbots are used for initial filtering before escalating to a human being if necessary.

Since ChatGPT hasn’t got the knack for creativity similar to traditional novels and story books but can make good time-pass tales for your kids, throwing together simple plots and language from basic prompts. And despite its popularity, it won’t replace traditionally published kids’ story books. However, if you’re pressed for time or away from your kid’s trove of bedtime tales, generating one through ChatGPT can be the best choice.

Suppose you input the desired nutritional goals and dietary constraints. In that case, ChatGPT will devise a meal plan and share the necessary grocery list containing the items for the diet plan.

What Makes ChatGPT Incredibly Different From Others? Is It Going to Replace Google?

Onto the bigger question now! Given the scope and capability of ChatGpt, will it ever replace the search engine giant Google? Since over one million people have taken advantage of ChatGPT, they’ve been impressed with its ability to generate poetry, fix code, and answer questions. That is pretty close to working like a search engine. We did a little test of our own. Let’s ask “How is Instant coffee made?” and compare results of Google and ChatGPT.

The results do look promising. ChatGPT is new in the market and therefore does have a few limitations. Considering the fact that ChatGPT has only been fed training data up to 2021, it seems to be doing a pretty amazing job so far. Even though it’s designed as a chatbot, we see a strong future here. Quoting Bloomberg’s Palmy Olsen,

Answers from the AI-powered chatbot are often more useful than those from the world’s biggest search engine. Alphabet should be worried.

Here’s why this could be possible. Google uses text-crawling robots to scrape and index data, while ChatGPT uses ‘transformer’, a deep learning model. Transformers enable ChatGPT to generate answers with rich detail – which is why the debate on ChatGPT versus Google sways some industry analysts to reconsider the future of search.

Does ChatGPT Have any Downside to it?

Any technology, when it comes to the horizon, it comes with its implications too. So does ChatGPT.

ChatGPT often provides absurd or mistaken responses, even if the answers are correct. Although there are moderation tools that limit ChatGPT from responding to dangerous requests, OpenAI says that the technology is not perfect yet.

The model is quite wordy and often repeats the same phrases. The reasons are over-optimization and bias of human trainers, who preferred more detailed answers in the human feedback process.

Instead of asking a straightforward question when a user types a dubious query, the model starts guessing the intent behind it, which, sometimes, is wrong.

Is It Going To Replace Human jobs?

ChatGPT technology is not going to replace your jobs. Even though it’s a powerful tool that automates conversation and other human tasks, it’s still a long way from being able to replace human creativity and interpersonal skills. Nonetheless, GPT technology is best at augmenting tasks, not replacing them. Using chatGPT can give people more time to concentrate on higher-value, creativity-requiring tasks.

It has flaws, but we’re witnessing significant headway in public, conversational AI. ChatGPT has opened the doors for a new wave of chatbot innovation, perhaps the kind many of you hoped for but failed to materialize. At least until now.

And while ChatGPT is a milestone, it’s certainly not replacing Google Search anytime. Also, the popularity of ChatGPT can be seen as a change for the better, offering a glimpse into where online search and text generation tools could be headed in the future, with all related promises and pitfalls.