LiDAR: An Introduction to Light Detection and Ranging Technology

Technology, everyday opens up new and inventive ways of capturing the physical world digitally with other equally valuable tools. Now we have another one coming down the pipeline that will improve our capability to sense and detect things in the real world.

A technology similar in terms and essence to RADAR, LiDAR is on its way to offer us a better outlook of surroundings. Lidar has been around for years, but now it is more accessible, begetting endless benefits to every industry. For instance, it drives down costs, creates safer environments, and makes things happen that were once impossible.

For your thorough understanding, it’s crucial to find out what is LiDAR technology. How does it works, and where it’s heading?

Scroll down this in-depth blog to learn closely about LiDAR.

What Does LiDAR Stand for?

Lidar, short for Light Detecting and Ranging – is a remote sensing technology that uses the pulse from a laser to collect measurements. These pulses help create 3D models and maps of surroundings and objects.

Note: LiDAR is sometimes written as “Lidar” or “LADAR.”

This technology is why mapping, navigation, meteorology, facial recognition, and even household appliances are taken by storm as it offers detailed, clear-cut images of objects and surroundings.

How Was LiDAR Born? A Short History

LiDAR was originally a combo of the words “Light” and “Radar.”

LiDAR’s inception can be traced back to the 1930s when people realized that solid objects could reflect light. After this realization, laser technology was introduced.

Right after the invention of the laser in the late1950s, Lidar technology was born.

In the early 1960s, Hughes, an Aircraft company, created a LiDAR like-system for satellite tracking.

In the 1970s, this remote sensing technology was deployed on airborne sensors to map forests, oceans, and the atmosphere. In the same year, LiDAR was used during the Apollo 15 mission – the fourth mission in which humans walked on the moon to get a detailed analysis of its surface.

Since then, LiDAR has been on its way to transforming industries showing promising results for various industries. 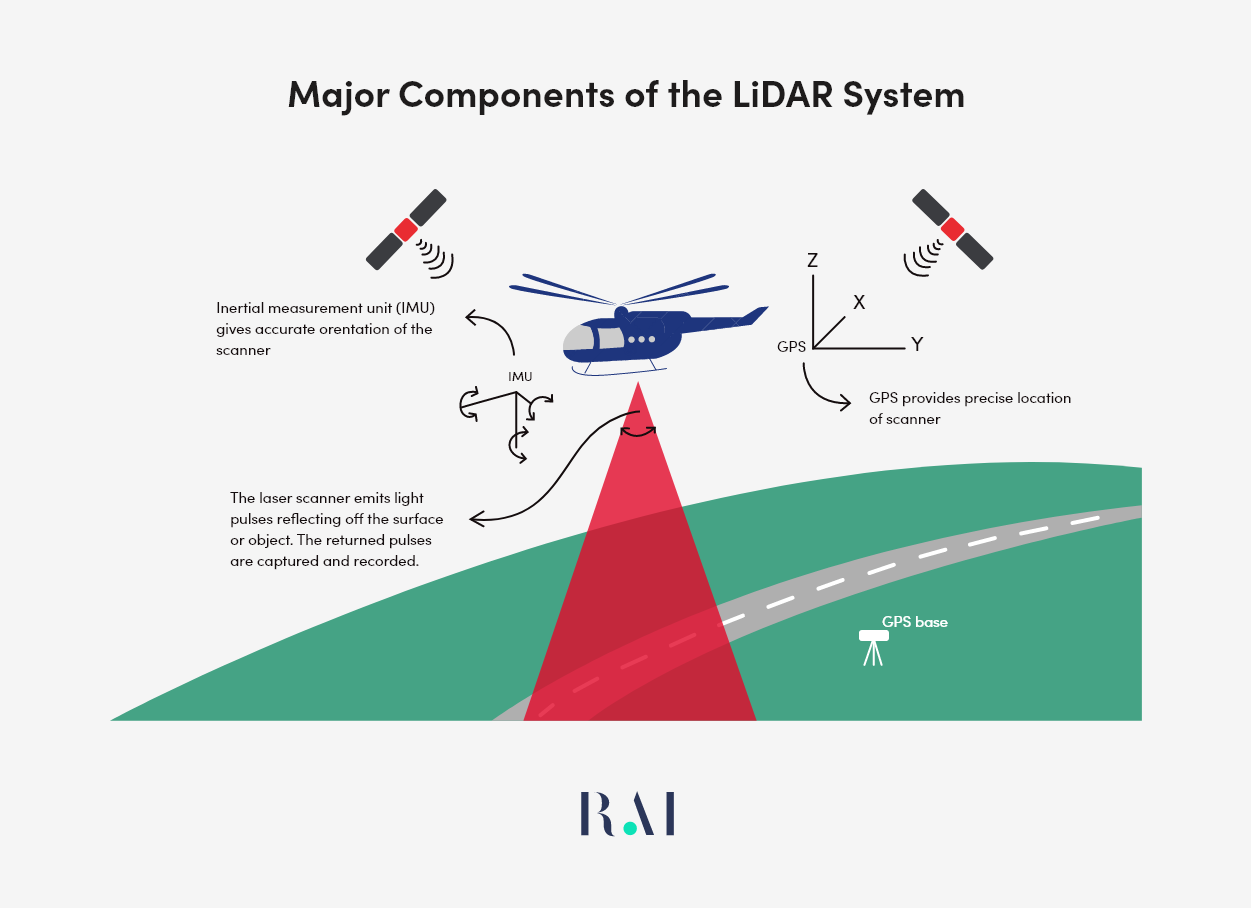 The laser sensor is mainly responsible for sending out the light pulses. Since light is bouncy, it bounces back after touching a solid surface or object.

It scans the light pulses that reflect off the object or surface.

The GPS receiver calculates how far the light pulse has gone relative to Lidar’s position. It gives you a highly accurate mapping of an object’s space and position.

How Does LiDAR Work?

The working principle of LiDAR is quite simple.

LiDAR sensor quickly sends pulses of light in the form of laser rays. The rays would reflect on surrounding objects like trees, cars, buildings, etc., or directly to the land and however, goes back to the sensor after reflecting.

Each ray takes a specific time to reach and bounce back from the object. The distance it covers is then calculated using the velocity of light. These are known as “ ToF (Time of Flight measurements).”

A potential LiDAR sends hundreds of thousands of pulses per second — all these pulses are collected, measured, and processed to create a 3D visualization of environment known as a point cloud.

2 types of LiDAR systems exists according to the way they performs:

You can mount it either on a moving vehicle or fix it on the ground. These lidars provide you with a 3D, closer look at surfaces after their scanning. It’s worthwhile for applications that require a detailed analysis of ground or objects, such as city surveys, forest inventory measurements and canopy characterization. 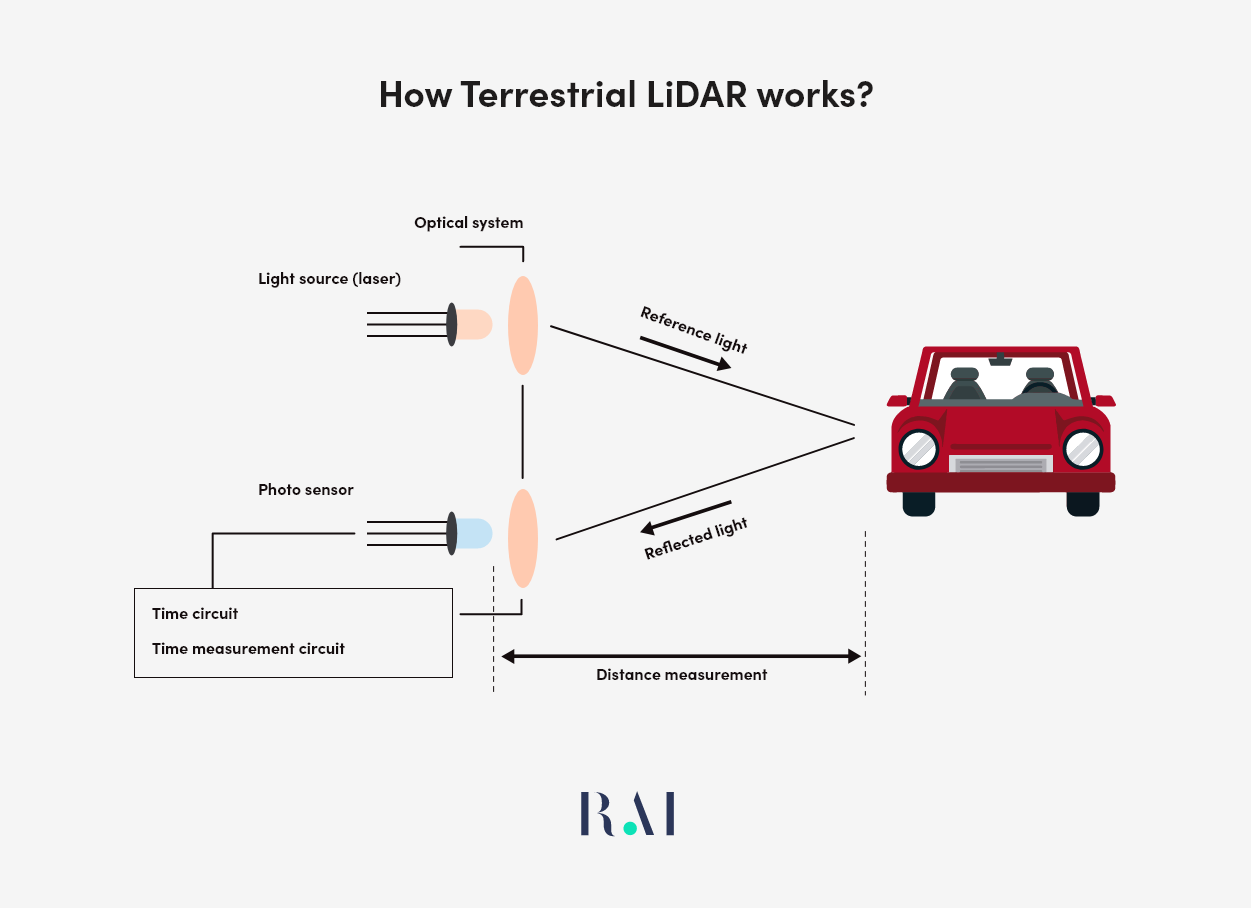 As its name suggests, it’s a non-static lidar system placed on top of a moving vehicle. It has an additional Inertial Navigation System (INS) and few cameras.

While the vehicle is moving, the lidar system continually sends laser pulses in all directions, reading the reflections. It collects these data points and processes them to assess poor roads and railway tracks thoroughly. Moreover, it identifies bumps in the road. These lidars could help the city’s management to fix these issues asap.

Mobile terrestrial lidars significantly assist self-driven cars in identifying others vehicles and humans on the way.

Though it is a static terrestrial lidar, however a portable one. Typically, this kind of lidar unit is firmly fixed on a static object, for instance, a tripod. You can place this portable lidar in any location.

It works similarly to mobile terrestrial lidar, the only difference being that it sends light pulses in all directions from a fixed point. Construction, mining, and engineering domains leverage static lidar for a better structural analysis.

Doing justice to its name, airborne lidar is placed in the air through aircraft or helicopters. While hovering over the earth’s surface, it sends light pulses downwards to detect and gather spatial data. Comparatively, It is one of the swift and most efficient lidar as it offers a bird’s eye view of huge areas.

Since Airborne lidars provide high-precision monitoring and keep locations under surveillance from the sky, countries integrate them to have more robust defense systems.

Moreover, the Airborne Lidar market has witnessed a boost in demand for infrastructure projects. These types of lidars anticipate fueling the overall airborne lidar market trends.

Based on the area that Airborne LiDARs scan, it further has three types:

Usually, topography, the process of studying land surfaces and features of a region, is done with topographic lidars. This lidar typically uses a near-infrared laser to map the land. Light pulses are sent downwards, that help understands the surface characteristics and chalks out a detailed map of a particular piece of land.

Opposite to topographic, Bathymetric lidar scans measure the depth of water bodies. It is similar to topographic lidar in working but with an additional feature that sends green laser pulses. These green pulses penetrate the waterbodies and go back to the airborne vehicle. 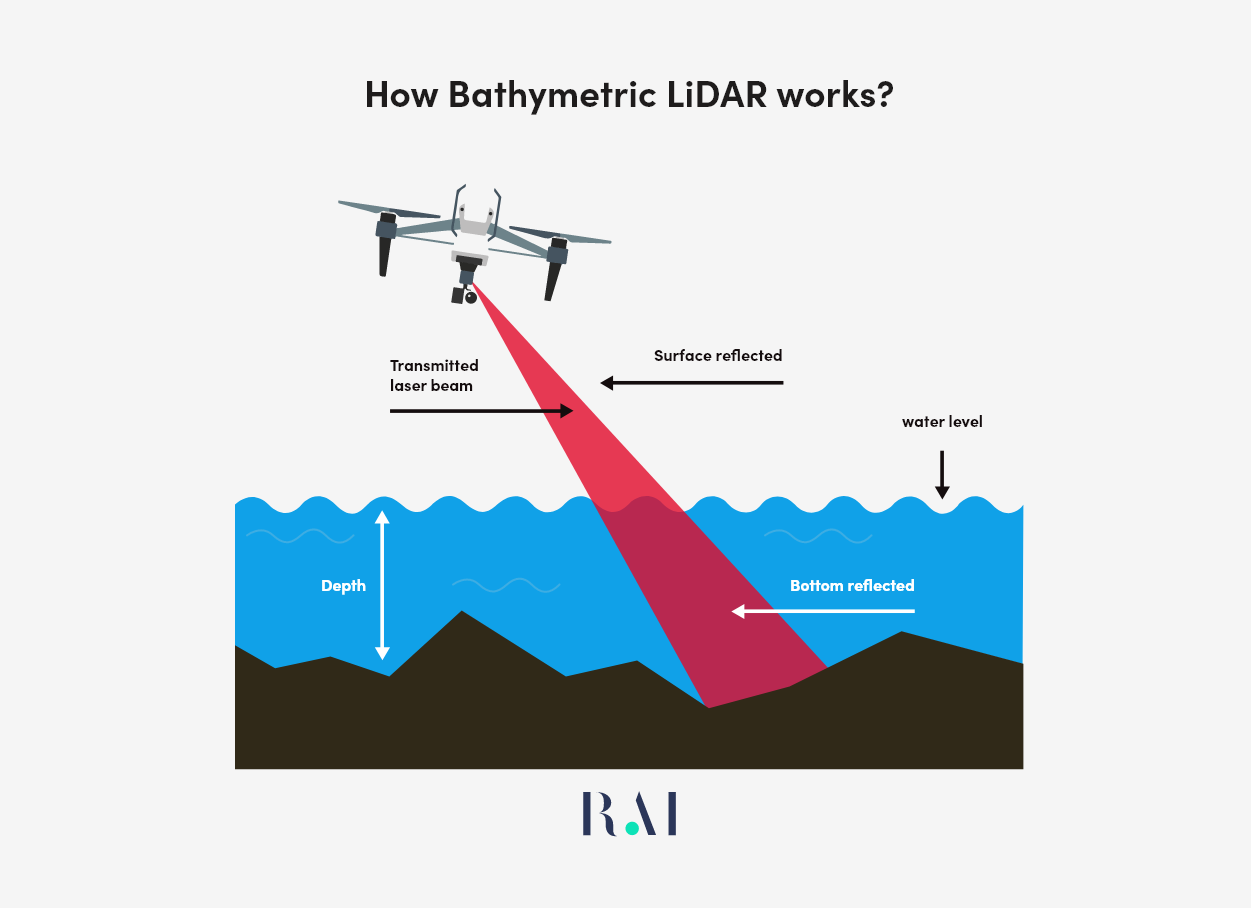 Lidar units can orbit the earth, too, in the form of satellites.

The ultimate goal of satellite lidars is to produce high-resolution, laser-ranging observations of Earth’s 3D structure. Whereas land-based and airborne Lidars provide a high-resolution digital surface model, satellite LiDARs reveal crucial details of the vertical profile of the atmosphere globally.

It offers information about elevation changes and the vertical distribution of clouds and aerosols (small particles in the atmosphere).

The HSRL scientist studies the aerosol size, composition, distribution, and movement from an airborne platform.

What is Lidar Mapping?

LiDAR mapping is an exciting new technology – it combines an integrated Inertial Measurement Unit (IMU) with a GNSS receiver to create real-time maps.

It captures detailed 3D information making it perfect for self-driving cars or other applications where timing and accuracy are crucial factors.

Often used with lidar – Digital elevation models (DEMs) are 3D representations of the earth’s surface based on elevation data.

Using both technologies together, you can get more accurate measurements because lidar can penetrate through things like trees and water, which would otherwise block the signal from reaching the ground.

A DTM represents the ground surface as you view it from above — it contains all sorts of information about hills, valleys, ridges, etc. It’s similar to an elevation map since both contain topographical information. However, an elevation map only has two dimensions (x and y). In contrast, a DTM has a third dimension (z) representing depth or height.

Types of LiDAR Technology by Application

Few more types of Lidar based on other classifications:

DIAL monitors the ozone layer in the lower atmosphere. More precisely, it measures the gas concentration and checks the atmosphere’s pollution level.

ESA’s (European Space Agency) research satellite Aeolus produces wind profiles with Lidar. Orbiting around the earth at an altitude of 320 km, Aeolus shoots short pulses of UV light at the earth. A telescope then gathers the scattered light by aerosols and assesses the light pulse duration and frequency.

Raman lidar goes one step beyond in measuring different levels of water vapors, temperature, and aerosols in the environment. It detects signals with inelastic scattering – a process that detects signals in reflected-back laser pulses with diverse wavelengths.

HSRL, is an acronym for High Spectral Resolution LiDAR and is similar to Raman lidar but with an airborne system. It also measures the environment’s ratio to water vapors and aerosols.

Initially, lidar was passive in making headway since major technologies, such as GPS and IMUs, were missing. When LiDAR gave itself access to these newer technologies, its growth became exponential.

Demand for mapping applications during the 1990s gives rise to the very first commercial LiDARs. Since technological advancement was at its peak, LiDAR, not missing the opportunity, further coupled itself with aerial cameras. It enables photogrammetry and high-resolution terrain mapping, which helps Lidar provide accurate land surveying and mapping results.

Since then, Lidar has been wreaking unimaginable benefits for scientific fields and daily applications.

This pulsed laser technology has enormous applications for mapping, providing detailed information and data on the environment. Whether in the automotive sector, gaming industry, real estate, or construction, LiDAR offers every industry the edge before setting foot on a racetrack.

Some popular applications of LiDAR technology are:

LiDAR isn’t only useful on earth, It plays a major role in space too, enabling NASA to land lunar vehicles safely.

LiDar’s range and resolution characteristics allow Geo-scientists to uncover ancient ruins that otherwise would not be easy to investigate.

Multiple lidar sensors identify the shape of the mound that grain makes when poured into the silo. LiDAr also optimizes the movement of automated machinery in harvesting crops.

Since molecules and atoms reflect and scatter light in many ways, LiDAR can measure the atmospheric composition, water vapor, and dust particles.

Why is LiDAR Popular Among its Similar Technologies?

LiDAR isn’t the only remote sensing technology transforming how the world gathers information. RADAR and SONAR are part of the race too. But what makes LiDAR so popular? Let’s have a look:

You might be mindful that RADAR (Radio Detection and Ranging) transmits radio waves and measures the time that waves takes to get back — in turn giving you the details about how far away objects are.

LiDAR, however, has a big advantage over both, though. Light has a shorter wavelength than other waveforms, so it can give you clearer and more accurate outputs. For instance, besides distance details, LiDar also offers details of an object’s shape, position, speed, etc.

How is LiDAR Making its Way Towards Consumer Electronics?

Take a look around you, and you may spot lidar in action — The first thing you may see in your daily life are the gadgets in your hands. For example:

Pushing the boundaries of innovation to enrich the user experience, Apple includes a liDAR scanner in their iPhone 12 pro and iPhone 12 pro max. LiDAr’s capability “to see in the dark” empowers you to autofocus 6x faster in low-light scenes and Night mode portraits.

Moving towards the future, Chinese technology giant Baidu has released its Robo-taxi, with more than 8 LiDARs.

Baidu’s self-driving cars enable you to book a car and reach wherever you want without anyone behind the wheel. Moreover, these cars have dramatically lowered production costs.

Other companies like GM, Honda, and Mercedes-Benz have also shown off their vehicles without steering wheels, using LiDAR sensors instead.

Harnessing the LiDAR scanners, AR apps can detect what’s supposed to be in front or behind a virtual object. For example, Physics Sandbox, an AR game, lets you place virtual blocks in a real environment to see how they interact with one another.

These key takeaways spell out what is LiDAR technology in a nutshell: