Is LiDAR Better than Computer Vision?

Would you believe if we say that LiDAR is currently changing the world?

Believe it or not, the truth is; LiDAR is the only sensor that understands the world in 3D using laser beams, much like how radar works using radio waves. It provides us with accurate 3D depth measurements and brings better outcomes.

LiDAR has been around for a while. Now it’s more modest and handy than ever. And the best part is — this technology is appearing in smart homes as well.

Some of you, however, might find LiDAR pretty hard to understand and often confuse it with a camera, especially talking about self-driving cars.

For autonomous vehicles, there’s another thrilling technology in the race: Computer Vision, one of the most powerful and compelling types of Artificial Intelligence.

Computer vision is like doling out human intelligence and instincts to a computer.

Here’s a definition of computer vision for you:

Computer vision, a recent branch of AI technology, focuses on replicating human vision. It helps computers interpret and process those visions (visual data such as images and videos) similar to humans and provides an accurate output.

What Makes Computer Vision so thrilling?

The key is – it doesn’t take much time to decipher an image.

Think about the past when even supercomputers might take weeks or months to chug through little calculations.

Today’s velocious chips, robust and reliable internet connection, and cloud networks have made the process lightning fast. It makes computers “situationally aware” like us. That’s Unbelievable!

Here is the comparison chart between LiDAR and computer vision: 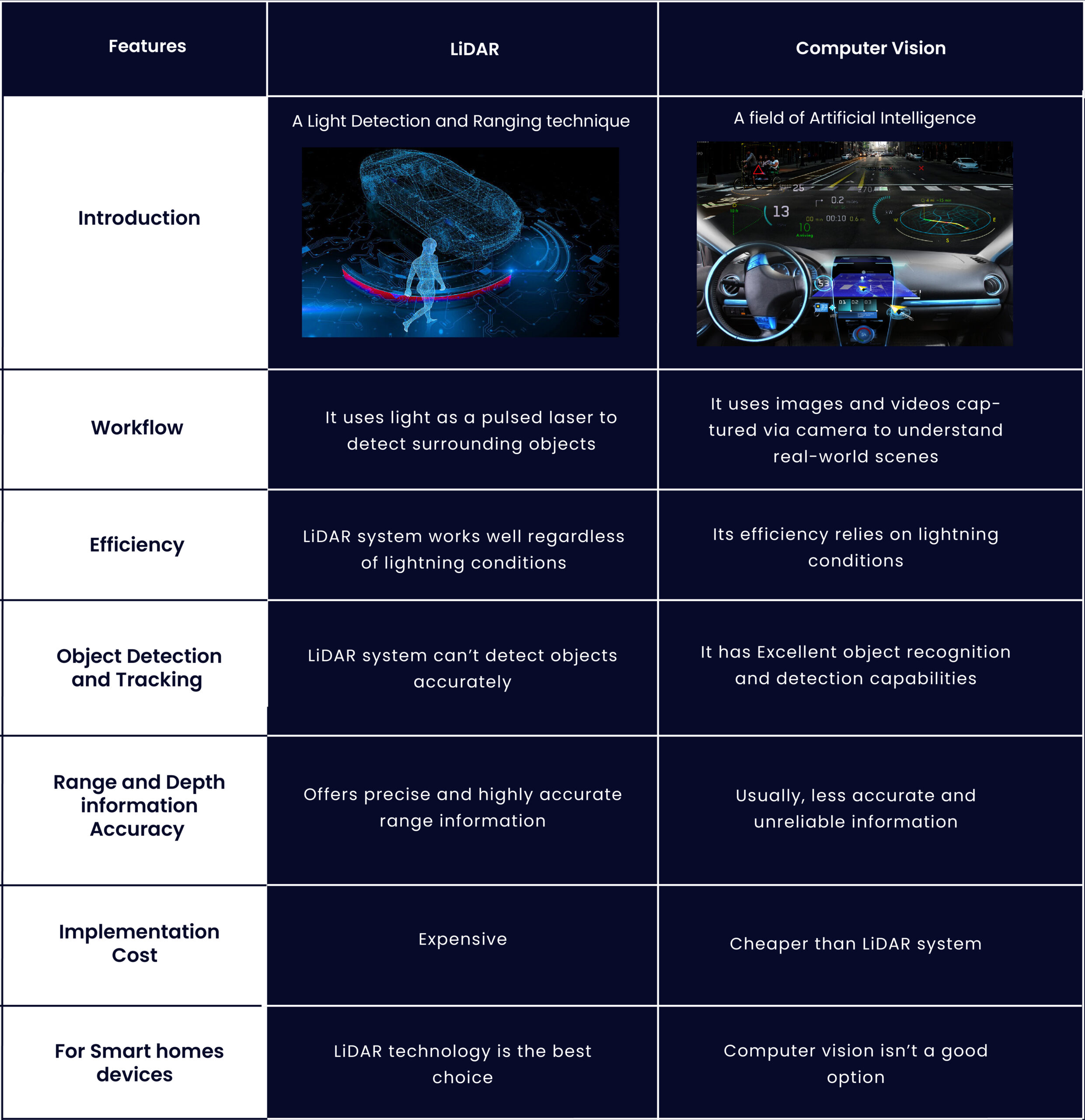 Cameras capture video from different angles around the car and feed it to computer vision software. The software processes the visual data quickly to find the extremities of roads, read traffic signs, and detect neighboring cars, objects, and people.

Computer Vision forms about 80% of the work that Self Driving cars do to drive around.

That’s how computer vision allows self-driving cars to steer their way on roads and streets, avoiding obstacles and safely taking you to your destination.

On the other hand, you might know LiDAR as the key self-driving car sensor.

Now imagine if you could see in all directions, all the time.

You can’t, obviously, but LiDAR can!

LiDAR gives self-driving cars a continuous 360 degrees of visibility. It helps cars create a visual map based on the readings from the laser beams. The LiDAR system sends thousands of laser beams every passing second to create a 3D map that assists cars in knowing about their surroundings in detail.

Moreover, LiDAR provides insanely accurate depth information. It measures the distance of the objects concerning it with much precision. These 3D maps and in-depth distance details make self-driving cars work in any condition.

Is LiDAR better than computer vision for autonomous vehicles?

First, you need to understand how both technologies make vehicles driverless, so you can decide on your own.

Also, it leverages advanced machine vision algorithms and their extensive training to identify the objects and further translate them into action. Computer vision systems must work at high speed so that autonomous vehicles can make accurate decisions on time.

Unlike computer vision, LiDAR sensors can work even in poor weather conditions. It can detect the distance and rate of other surrounding objects far better than vision systems.

What’s more, LiDAR doesn’t get tricked by shadows, sunlight, or the oncoming headlights of other cars. LiDAR-based vehicles have more time to make critical safety and navigational decisions.

Both technologies play a key role in making vehicles driverless. We can’t overlook one’s benefits while making a comparison.

Which Technology Do You Want to Leverage?

A camera that plays with visuals or a light-detecting and ranging technique? Yet the choice is always yours.

While the whole automotive world, including NASA, uses LiDAR sensors, TESLA, the pioneer of electric cars, culls computer vision over Lidar. In addition, all other companies making self-driving cars, for instance, Uber, Waymo, and Toyota, use LiDAR, but not Tesla.

And if you’re into autonomous driving, you must be aware of the ongoing debate.

But Why TESLA isn’t a fan of LiDAR technology?

“Anyone Relying on LiDAR is doomed,” says Elon Musk. He even defined LiDAR technology as “stupid.”

But why does Musk hate it?

The first is that LiDAR sensors are needlessly expensive. Secondly, he views LiDARs as an appendage — an accessory that would give a car a ridiculous look.

The most apparent reason is: the company is highly focused on cost. Autonomous vehicles already cost a lot. Adding the price of LiDARs on top of it would make it more expensive, and Tesla’s aims to offer affordable self-driving cars.

LiDAR faces a hard time identifying moving objects. It can’t tell apart humans, animals, or other things. It doesn’t even know how these objects are moving or even what these objects are. Inversely, Tesla is pretty sure about their computer vision systems that accurately identify any object, moving or static.

Besides this, the Radars in Tesla’s self-driving cars instantly notify if there’s any obstacle ahead so that car can react to the situation.

Tesla, however, steadily supports pure computer-vision-based approach for autonomous vehicles for obvious reasons. Nonetheless, only time, research, and testing will settle the debate.

Being around us for quite a while having applications in various industries, LiDAR is now moving towards a new domain with its increased pursuit of Augmented Reality.

Let’s get to know how LiDAR is making its way toward consumer electronics.

Pushing the industry with depth technology over the years and continuing with the innovation, Apple introduced another exciting capability in its iPhones pros: the LiDAR scanner.

With the iPhone’s machine learning algos and depth frameworks of iOs 14, you can understand the world in a better way — It builds a precise depth map of the scene, enabling object and room scanning, photo and video effects, and precise placement of AR objects.

LiDAR’s ability to see and capture in the dark has taken the iPhone’s camera system to a whole new level.

Instead of hunting for focus, the LiDAR scanner identifies, focuses, and captures the subject right away. In fact, with Lidar, you can improve focus time in low-light scenes by up to six times. Now you can focus on your subject more clearly without missing the moments!

That’s an incredible end-to-end photography workflow right from your pocket!

And this is just the beginning — the much-anticipated Apple Glasses will too have a LiDAR scanner rather a camera, which will surely transform the upcoming Augmented Reality glasses.

LiDAR enables Snapchat’s camera to see a metric scale mesh of any scene you want to capture. It understands the shape, surface, and meaning of all objects. This new level of understanding of distances and angles allows lenses to interact genuinely with the world around you.

You must be thinking about what LiDAR has to do with smart homes?

While LiDAR has been known as an outdoor technology, you will be surprised that smaller versions of LiDAR can be used indoors, making your homes smarter.

Since LiDAR can measure distance so accurately, you could use it in devices where you need to track measurements of a space or object. For example, IKEA’s phone app.

Lidar is a fairly new player in the smart home world, so there are few devices using LiDAR in homes.

Here are some interesting examples:

You’re safer at your workplace and home with LiDAR.

Traditional security systems are prone to errors and loopholes like false alarms, high installation and maintenance costs, and insensitive to weather conditions, which however, comprise your entire security system’s efficacy and reliability.

Thanks to LiDAR for its ability to see in the dark, work in the worst weather conditions and measure accurate distances. That makes it more popular for security and surveillance applications than radar and CCTV cameras.

LiDAR technology guides little machines, known as Robo-vacuums, to work. It enables them to roam around the floor for auto cleaning, avoid restricted areas and even automatically return to their base point to charge their batteries.

The light detection and ranging technology, LiDAR, is hyper-accurate, the most sophisticated and reliable way to measure the speed, movement, and position of objects, including athletes.

Sleek GPS wearables and camera trackers commonly have limitations around accuracy and consistency. Also, they struggle to grab the match’s valuable data at low speeds, especially in the larger stadiums.

In all these cases, LiDAR is the answer.

It can be used indoors and outdoors, in any stadium and on any training field, always giving precise, trustworthy data.

Since both technologies uses AI techniques like machine learning and neural networks to analyze data, you can imagine future of LiDAR and computer vision as together. A system that have the perks of both technologies.

Also, in the coming years, maybe there will be something different that dominates both. Until then, we can take both positives and make one whole.